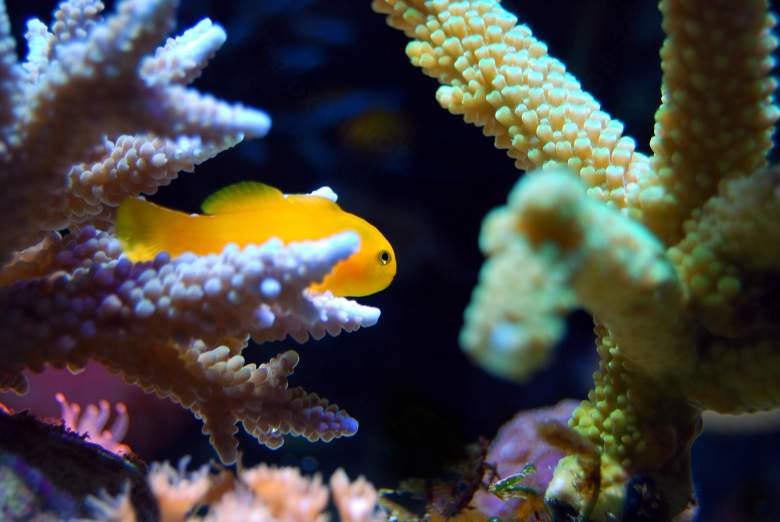 Saltwater aquariums have a somewhat undeserved reputation for being extremely hard to maintain, and this has deterred many people who would otherwise really enjoy the hobby of saltwater fishkeeping from starting up a saltwater tank.

If a person who has never kept fish takes the time to learn about these different aquarium concepts as they apply to maintaining a confined ecosystem, they will find themselves able to set up and enjoy both saltwater and freshwater aquariums. Read on to find out how to set up a saltwater aquarium the easy way.

Saltwater Aquariums: Not Hard, But Expensive

While a freshwater aquarium can get away without getting a water change for a few weeks and be none the worse for wear, such a period of neglect can have much worse consequences in a marine ecosystem due to the different chemical sensitivities involved.

Since these weekly water changes for a saltwater tank cannot be safely skipped without damaging water quality, and salt must be purchased and added for every water change, for large saltwater aquariums that can be a lot of marine salt, which can get expensive.

Not only that, most of the equipment involved in saltwater tanks is generally more expensive than the same equipment used in freshwater tanks. This is partially because saltwater is corrosive and requires stronger materials but is also the result of saltwater aquariums being perceived as a luxury item.

Here is a list of supplies necessary to start up a saltwater aquarium (before adding fish or other live specimens other than live rock):

All this equipment can range easily into hundreds of dollars. One of the constraints of saltwater aquariums is that by necessity, they must be bigger than many freshwater tanks, and the smallest nano reefs are not kept in tanks smaller than thirty gallons.

Some people have kept nano reefs in even smaller tanks, but such tanks are not tolerant of environmental swings and are best reserved for experienced aquarists.

As anyone who has kept an aquarium can attest to, thirty gallons is quite an investment in comparison to a smaller tank, both in terms of time and equipment costs. Saltwater tanks overall cost roughly twice as much as their freshwater counterparts to set up. But that doesn’t make them harder to maintain.

Filtration in aquariums is a process in which beneficial bacteria clean ammonia, nitrites, and other toxins out of the water and render it safe for the fish and other animals that call it home. Filtration is also what is responsible for making sure the water remains crystal clear for optimal viewing conditions.

Without filtration, tanks would quickly succumb to algae infestations, and the fish and other animals in them would die from their own waste ammonia. This ammonia is toxic to fish and can kill them even in very small amounts, making filtration a vital part of aquarium maintenance.

The good news is that once a saltwater filtration system is properly established, the bacteria in it are self-sustaining as long as the water quality (and water levels) are kept up.

Along with filtration, saltwater aquariums also utilize protein skimmers to help keep nitrates in the aquarium down. This is especially important for keeping live coral, an animal that is very susceptible to nitrate poisoning.

Circulation and Current in the Saltwater Aquarium

Another important concept to understand with regards to setting up a saltwater aquarium is circulation. In addition to normal filtration equipment, saltwater aquariums require powerheads in order to generate an underwater current.

Powerheads help to mimic the current found in saltwater habitats, and also benefit saltwater tanks in the following ways:

When choosing a powerhead, it’s a good idea to choose a well-known and respected brand such as Marineland or AquaClear rather than an off-brand powerhead, as you’re more likely to get better technical support if you need it with a reputable company.

It pays to choose a powerhead that can be easily disassembled and reassembled, as you may have to clear an obstruction from the impeller at some point. You should also look for a powerhead with a guard over the intake to make sure that none of your tank’s occupants accidentally gets sucked up into the system.

Before you get involved with any fish for your saltwater aquarium, you need to consider purchasing live rock and live substrate. Live rock is dead coral that contains live microscopic and miniature marine life on and within it.

Buying live rock for your saltwater aquarium can help jumpstart your saltwater ecosystem, but before you add live rock to your tank, it should be cycled for several weeks with no live animals (just like with freshwater aquariums) to establish the nitrogen cycle and a beneficial bacteria colony for the filtration system.

There are two major kinds of live rock used in saltwater aquariums:

Live rock has many different functions in the saltwater aquarium. It acts as the primary biological filter for the tank, helping to remove excess toxins in the water column, and also serves as a natural home for many of your tank’s denizens.

Because many saltwater fish are still wild caught from the ocean, they can be more fragile and sensitive to habitat than freshwater species. This means that replicating their natural environment as closely as possible is vital to maintaining their health.

There are two ways you can get saltwater to maintain a saltwater aquarium: premixed saltwater bought by the gallon, and a synthetic seawater mix that is mixed into freshwater to convert it to saltwater.

You might be tempted to use premixed saltwater for your aquarium, and this can certainly take a lot of the difficulty out of trying to maintain it, but these gallons of premixed saltwater are much more expensive than mixing the water yourself.

For a saltwater aquarium that only contains fish, you can get away with mixing tap water. However, if you want to have a reef aquarium, you’ve got to use a reverse osmosis system to generate reverse osmosis/deionized (RO/DI) water for your tank.

To mix sea water for your aquarium initially, you’ll need the following supplies

Note: It is important not to add live rock or live animals to a saltwater aquarium until the nitrogen cycle has been established to prevent fish and animal death.

To mix up a batch of sea water for a water change on a saltwater aquarium, gather the supplies and then perform the following procedure:

Once an aquarium is established, water will need to be changed out each week at a volume of roughly 20% and should be topped off occasionally to account for evaporation.

Saltwater testing kits are widely available both online and in pet supply shops and contain all of the necessary chemicals to test the levels in your aquarium. Like freshwater test kits, saltwater test kits test for the following water parameters:

While there are other you can monitor for in an aquarium, monitoring these four parameters is the most important aspect of testing your aquarium’s water quality.

Since a build-up of these toxic chemicals in aquarium water can kill the aquarium’s inhabitants quickly, it’s important to check these levels at least once a week to keep on top of things.

The easiest way to simplify the weekly chore of testing water quality is twofold. It is easier to remember to test water quality if you do weekly water changes at the same time and batch the two chores together. This is also a good time to generally observe your tank and each of the animals in it to assess their health and behavior.

Maintaining a saltwater aquarium can seem overwhelming, but it doesn’t have to be. If you dedicate an hour or so once a week to maintaining your aquarium, it will stay immaculate. Maintenance of a tank is much easier when you start with and keep up a good baseline.

Along with sea salt mix, there are other supplements you can add to your saltwater tank to enrich the water and help encourage new growth in your live rock and corals. Seawater is one of the most nutrient and mineral dense solutions on Earth, and it can be difficult to recreate this diversity in captivity. Saltwater supplements help with this task.

These nutrients are vital for marine life and become naturally depleted as their bodies use it up. The major minerals that need to be added back into a captive marine ecosystem include the following:

There are also minor trace minerals that are vital for the health of an enriched saltwater aquarium, and they include the following:

Along with the appropriate electrical equipment for filtration/skimming/circulation and the proper chemical ingredients to recreate seawater, you will also need some basic supplies and maintenance equipment in order to keep your saltwater aquarium up.

Here are some of the basic maintenance tools you should acquire in order to keep up your saltwater aquarium:

Along with the equipment used in water changes and cleaning the aquarium, you should also keep water conditioner and dechlorinators on hand, as well as first aid supplies for your fish in case of breakouts of illness in your tank.

It can also be advisable to keep backups of some of your equipment, such as backup air pumps and filters. This can be extremely useful to have in case your equipment suddenly malfunctions and you aren’t able to immediately go out and replace it.

When setting up a saltwater aquarium, it’s important to learn about each type of animal and plant you are keeping in your aquarium on an individual level to find out what their optimal environmental parameters are.

In the case of saltwater fish, many kinds of fish cannot be housed together without one type of fish trying to kill another, either out of predatory instinct or due to territoriality (many reef fish are highly territorial).

Another thing to keep in mind is the compatibility between corals and fish. Many saltwater fish are not compatible with corals because they will eat the coral or strip it of life, and some inhabitants of reefs, such as anemones, are dangerous to smaller fish.

Setting Up a Saltwater Aquarium

The initial steps of setting up a saltwater aquarium are not that much different than the steps involved in setting up a freshwater aquarium. You’ll want to choose the aquarium’s final location before filling it with water, as once it is filled, it will weigh several hundred pounds and will be impossible to move without draining it.

And with saltwater aquariums, draining it to move it is not an easy feat, and could easily result in the loss of some of your fish. So it’s important that you choose the location of your tank wisely.

After choosing a spot for your aquarium (with plenty of nearby electrical outlet support for aquarium-related gadgetry), you need to:

Maintaining a Saltwater Aquarium After Setup

Saltwater Aquariums Are as Easy as Any Other Tank

Aquariums may be fairly low maintenance, but it only takes a little neglect for an ecosystem in a tank to spiral out of control.

The aquarium depends on the aquarist to maintain every parameter, so this means that the person maintaining the aquarium needs to be dedicated to weekly water changes in order to reduce maintenance in other ways. 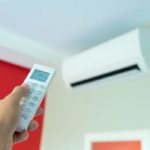 Can You Keep An Aquarium In An AC Room? 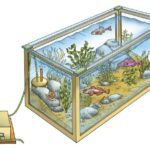 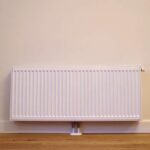 Can You Put a Fish Tank Near a Radiator? 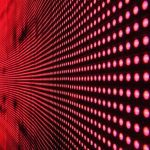